Five Points is a village unlike any other located in the heart of downtown Columbia, South Carolina.  Surrounded by 7+ residential neighborhoods, the University of South Carolina, a buzzing metropolitan, government agencies and supportive military community, this century old destination has something for everyone! 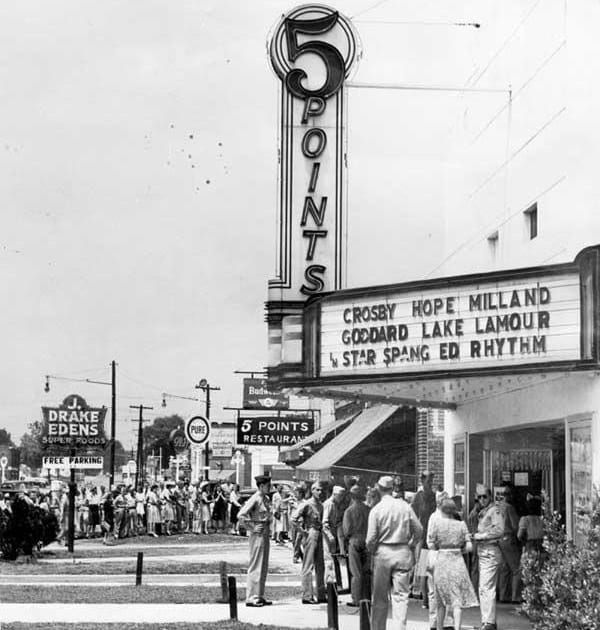 With significant improvement of storm drainage infrastructure in the 1910’s and 1920’s the City of Columbia prepared the swampy land for redevelopment transforming a marshy “no man’s” land on the edge of Columbia’s iconic grid into a thriving commercial district full of charm, diversity, culture and class.

Once referred to as a “city-within-a-city,” Five Points remains an iconic neighborhood in Columbia and beyond dedicated to preserving its rich legacy. For over 100 years, through change and growth, Columbians have witnessed many phases, yet the streets of Five Points remain timeless. Time has afforded the commencement of symbols that preserve the history and model the tradition of Five Points.

With 74 “resources,” mostly buildings dating from the 1920’s through the 1940’s, this historic district was added to the National Register of Historic Places in 2019 joining more than 1,400 National Register listings in South Carolina. Most of Five Points’ historic structures are still recognizable, including the Tudor Revival storefronts wrapping the west corner of Harden and Devine streets (built in 1929-31), Claussen’s Bakery at 2003 Greene Street (built in 1928), the stores on either side of Saluda Avenue (1940’s), Yesterday’s at 2030 Devine Street (built 1935, second-story added in the early 1950’s), and the Five Points Theater at 630-34 Harden Street (1939).

Today, Five Points remains that one of a kind district without an anchor store and home to the highest density of locally owned businesses.  Columbia’s Original Village Neighborhood buzzes with foot traffic still an iconic neighborhood in Columbia and beyond with over 100 years of history and pockets of unique retailers and restaurants, commercial businesses and services, peppered with culture and charm as a truly eclectic village neighborhood that begs to be explored!

WHAT IS FIVE POINTS?

Well, that depends who you ask. Five Points has over 100 years of history, accomplishments, tenants, evolution, nostalgia, and the list goes on and on! For some, Five Points is synonymous with Small Business. For others it’s a destination, a must see, a planned outing. Five Points is widely recognized as a gathering place. Overall, the one word that resonates in unison with Five Points is COMMUNITY…. it is after all Columbia’s Original Village Neighborhood. Simply put, Five Points is the downtown district extending from the intersection of Santee Avenue, Harden & Devine Streets connecting Gervais and Blossom Street.

The Five Points boundaries are home to over 100 businesses that offer everything from apparel, shoes & accessories, one of a kind gifts & purchases, to everyday services & living spaces.

SUPPORT LOCAL. Above all, this extraordinary village is enlivened by the pulsing heartbeat –the locally owned businesses.

– The Heartbeat of Five Points

Five Points is a Destination

Experience all Five Points has to offer – whether shopping, dining, just visiting – whatever the reason, take a stroll through the neighborhood and enjoy the amenities of Five Points – 100+ businesses, numerous events, 3 fountains,  art pieces, 8 murals, &  landmarks galore. Can you find all the treasures of Five Points?

Five Points is a Gathering Place

Everyone’s a neighbor –from our regulars, our students & our surrounding residents to our visitors & out-of-towners to families & four-legged friends, we invite you to share in our neighborhood! Over the decades Five Points has been host to a multitude of events bringing people together. From over 35 years of St. Pat’s in Five Points to the Sidewalk Sales, Jerryfest and more, there are many special opportunities for patrons to enjoy Columbia’s favorite village too!

Five Points, Columbia’s Original Village Neighborhood is a community unlike any other. From within its boundaries and extending throughout the City of Columbia, Five Points remains an integral part of the midlands. Infused with local businesses and charm, art and culture, events and projects, partners and community involvement, there’s always something worth sharing!

Five Points is Our Mission

While history is celebrated and cherished, the neighborhood continues in its tradition, evolving, as a village, together.  With evolution comes change and transition, and for Five Points, new opportunity.  The Five Points Association and its Board continue efforts to promote Five Points and what the village has to offer.   As a non-profit, the events, development, Clean & Safe team, and beautification projects wouldn’t be possible without the devoting support of our companions & champions; the City of Columbia and Richland County.